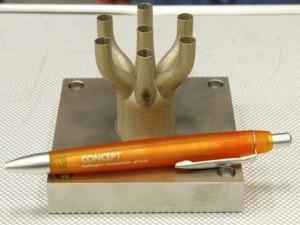 I always think of that scene in Apollo 13: “We need to make this… fit intothis… using this.” It’s a frustration that’s central to the whole film: how could we be able to send human beings all the way to the Moon and still be foiled by something as simple as the shape of a valve? More to the point, how could we send a rover all the way to Mars, and still worry about something as banal as a broken wheel or a bent rod? NASA has long struggled with this dissonance between the seemingly- and actually-difficult, and has recently looked to 3D printing to help close the gap; NASA wants to start printing replacement parts out of glue and Moon dust. Now that approach is being taken up by perhaps the only other organization that could hope to rival a space agency in terms of scale and grandeur: the US military.

Specifically, the Navy. The US Navy boasts some of (let’s be honest, virtually all of) the world’s most imposing moving structures; if we’re looking to create a mobile manufacturing base, there’s no better candidate to host it than the organization that ‘s already buildingmultiple of the most expensive military unit in human history (pictured below). Modern aircraft carriers are so huge they’re basically floating cities already, complete with conventional manufacturing facilities to provide a good portion of what the crew might need while at sea. It makes perfect sense to incorporate a high-quality 3D printer into the mix — the only question is whether 3D printing technology is up to the rigors of military use.

Though the dream of 3D printing an aircraft from scratch might be the ultimate end-point of this type of research, for the foreseeable future these initiatives will probably produce quick and dirty replacement parts. Again, NASA leads the way, having already printed theoretically mission ready parts. With this technology, the crew of Apollo 13 could have sent down the exact specifications for their round-to-square adapter problem, and quickly received the CAD file for a part made specifically for their needs. (See: What is 3D printing?)

NASA printed this small part last year, which is theoretically strong enough for an actual launch.

Realistic military applications are limited almost entirely by size; an F-35 is quite a way out, whether printed as a whole or as tens of thousands of parts, but a small, unmanned drone with only a few moving pieces? Not only is this plausible, it’s already happening. It’s not difficult to imagine a carrier, or perhaps even a large land vehicle, outfitted with a high-quality 3D printer, several tons of raw materials, and a few pre-fabricated cameras and circuit boards. Such a mobile manufacturing base could churn out precisely the type of drones needed for a given situation. Are you dealing with four insurgents hiding in a reinforced bunker with locked windows less than two feet wide? Your military could create a drone with the size and grasper needed to deal with that specific situation.

It could also make transport of basic supplies more efficient, holding powder and casing materials separately and combining them into bullets as needed, rather than storing them as imperfect cylinders with all sorts of wasted space within and between the units. Researchers at Virginia Tech even told the Armed Forces Journal that they believe 3D printing could produce high-quality propellants themselves — a truly chilling thought.

Assuming this idea takes off, which seems inevitable to at least some extent, it brings home two increasingly common themes in military technology: the increasing gap between the military-haves and the military-have-nots, and the increasing importance of cyber warfare. No insurgent force will be able to withstand a mobile drone factory, one that can simply roll into the middle of a desert and create for itself hundreds of little scouts to go scour local mountains and return. By the same token, we should remember that all it would take is a tiny modification to a 3D model to get a printer to churn out flawed or useless wastes of time and material.

In terms of military efficiency, I think the next great step in automating war will be recycling. Will future soldiers be collecting their spent casings, not to protect the locals or the environment, but to be broken down and reused later? Could we turn a drone into a combat helmet into a plate light-weight of Humvee armor, as needed?

We could even design weapons and equipment to break down after a certain amount of time so that they won’t remain useful should they fall into enemy hands. And if they remain with us, well, it’s the future now; we can always just make ourselves another.